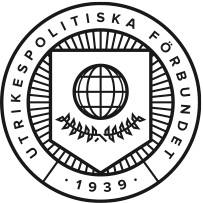 The Swedish Association of International Affairs, SAIA, is the umbrella organization of all the associations of international affairs in Sweden. SAIA is politically and religiously independent with the main objective to spread knowledge and further debate on international issues from diverse perspectives and opinions. The association works on a democratic basis and the conviction of the equal worth of all persons.

SAIA is currently compromised of eleven member associations ranging from Malmö in the south to Luleå in the north, and are all represented in the association’s board and at the annual general meeting. The board holds ambulatory meetings at the member associations’ home bases around five times per year. As a way to membership start-up associations of international affairs can be granted interim membership in SAIA.

SAIA’s work is first and foremost made up of the member associations’ projects and activities. Within SAIA around 300 lectures are organized every year. Speakers from many parts of society are invited to hold lectures and debates, on a wide array of subjects in front of an interested audience. Furthermore, debate contests, travels and study circles are held. The member associations also produce a growing number of magazines, radio- and TV-shows on the theme of foreign affairs. SAIA itself organizes a convention on international affairs every year. It is a venue where everyone who is interested is welcome and where lectures, debates and open discussions are held. SAIA also organizes seminars and lectures in Almedalen where members are invited to participate. Internally SAIA regularly organizes forum-meetings, where member organizations from the whole country meet, exchange experiences and take part in workshops. In Swedish language contexts, SAIA is called Utrikespolitiska Förbundet Sverige (UFS).

SAIA also has a number of committees in which members can get involved in: the economic, regulatory documents, international, communications and education committees. More information about these and other ways to get involved can be found at: www.ufsverige.org