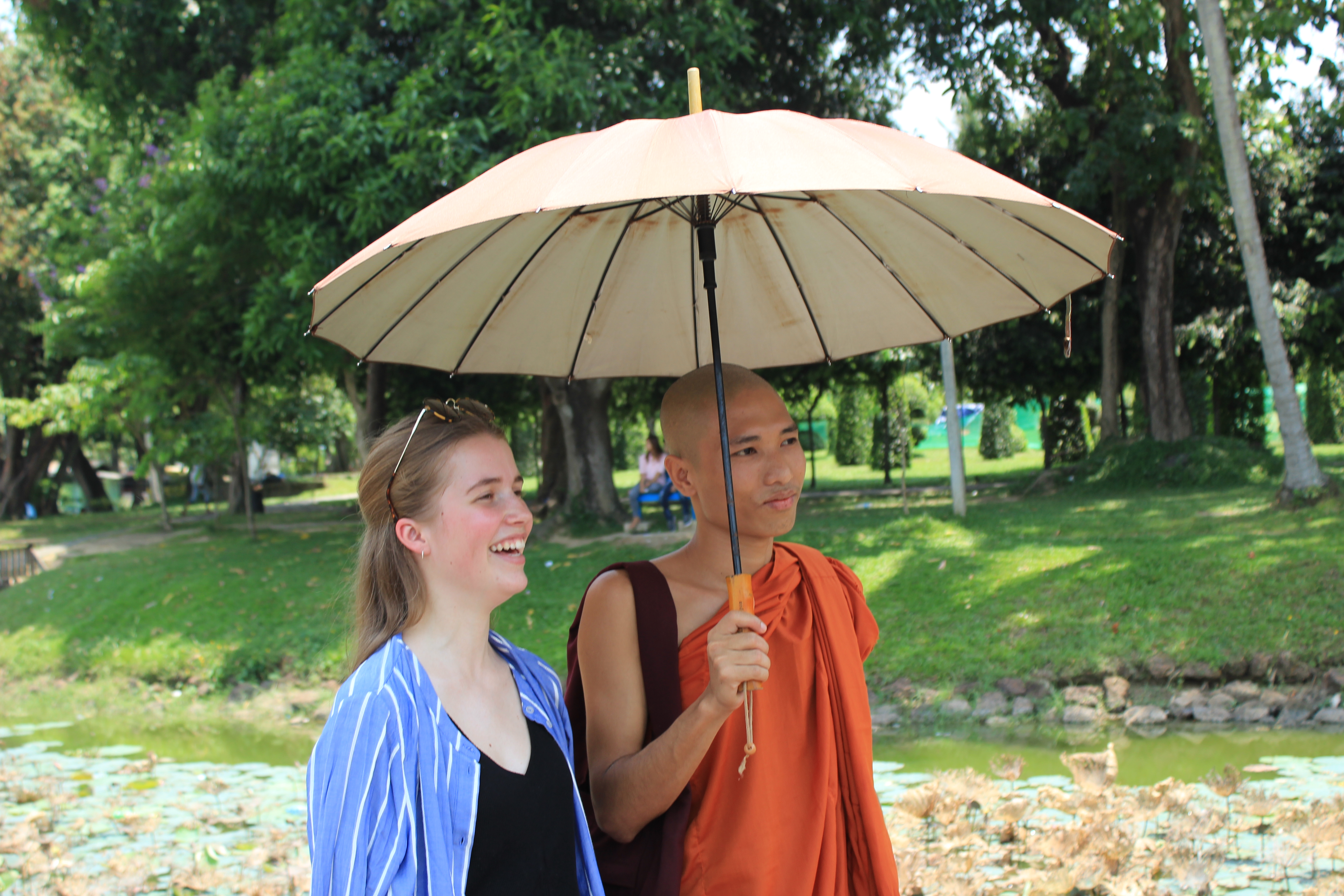 The second day started off no cooler than the first. With a high of 40 degrees, we were glad we could eat our breakfast on the air-conditioned top-floor of our hostel. After a good night’s sleep, we were eager to get out and learn more about the country.
Our second meeting of the trip was with the International Crisis Group, a think tank which advises governments on conflict mitigation. The branch in Myanmar has just one employee, Richard Horsey, who met us at the Shangri-La hotel in central Yangon. In their three annual reports on Myanmar, the organisation aims to provide a critical analysis and implicit recommendations for the furthering of the peace process. For Myanmar, peace has been particularly difficult to achieve given the changing political situation in the country. There are a number of armed groups opposed to the government, particularly in the border states. Since independence there have been continued attempts to negotiate long-standing peace, though all of these have failed. The most recent set of negotiations began in 2011 under the transitional military government, which hoped that a successful peace deal would boost their electoral chances as they voluntarily commenced democratisation in the country. Regardless, the National League for Democracy (NLD), led by Aung San Suu Kyi won the 2015 election instead and since then she has made achieving peace a central part of her political programme.
During the election period 2014-2015, the peace process has slowed significantly. Part of this is due to the fact that the outgoing transitional government dismantled the machinery of the peace process. For example, the ‘Myanmar Peace Centre’, which contributed to the nationwide ceasefire agreement of 2015, was closed down. To date, this agreement was signed by less than half of the groups opposed to the government, leading to doubts as to whether peace can be achieved during the current government’s term in office.
After eloquently providing us with a comprehensive summary of the political situation, Mr Horsey answered our questions regarding the ongoing persecution faced by the Rohingya Muslim minority living in the north western Rakhine state. According to Horsey, there are two explanations for this: basic crude racism and historical segregation. Whilst under British colonial rule, Burma was administered as part of India. This meant that there was not only a steady influx of labour from Bangladesh, but also that the Burmese state was governed by Indian bureaucrats. Anti-Indian sentiment would come to take a central role in the Burmese independence movement following the Second World War. Overall, our meeting with Mr Horsey was incredibly useful in providing us a basic overview of the political situation, and laid the foundations for meetings to come.


After the meeting, the Travel Group split up. Half went to the hotel pool to do some much needed revision and enjoy the sun. The other half headed off to Kandawgyi lake in the heart of the city. At the lake, we were approached by a pair of Buddhist monks who were eager to take selfies with us and practice their English. We then explored the park around Kandawgyi lake and visited the aptly named ‘Edible Mushroom Cultivation, Production and Consuming Demonstration Plot’.

Soon after it was time for our second meeting of the day, this time with the World Wildlife Fund for Nature (WWF). Here, we met with Hanna Helsingen, UF Programme Secretary of 2009/2010 and now Green Economy Programme Manager at WWF-Myanmar. Having been  a part of WWF activities in Myanmar from the very beginning, she explained that the first major challenge was determining the condition of Myanmar forest and wildlife. Through the use of both parometer flights and camera traps, WWF has been able to develop a broad understanding of the state of Myanmar’s natural environment. Myanmar is caught between the rapid development of a country that recently opened its borders and the ‘latecomer’s advantage’, which could allow it to avoid crucial mistakes other countries in the region have previously made. Although it is particularly vulnerable to natural disasters and thus to climate change, today Myanmar has the second highest deforestation rate in the world. Furthermore, the country is still a trade hub for illegal wildlife trade, supplying Vietnam, Thailand and China in particular. The organisations aim in this regard is to create safe havens for the wildlife, free from poachers.

In the evening the group set out for Rangoon Tea House, a restaurant recommended to us by an American girl we met in the hostel, as well as by a friend of Caroline. On the way, we took a detour through the local night markets. The markets sold an array of food, from goat’s head to betel nuts – chewed by Burmese people due to its stimulant properties, which has been described as the equivalent of drinking six cups of coffee. Meanwhile, Gustav (briefly) joined a football match with a group of kids playing in the street. The Tea House itself served delicious traditional Burmese tea and food, none of which was made of artificial meat this time.
By: Nathan Tipping and Linus Wieland