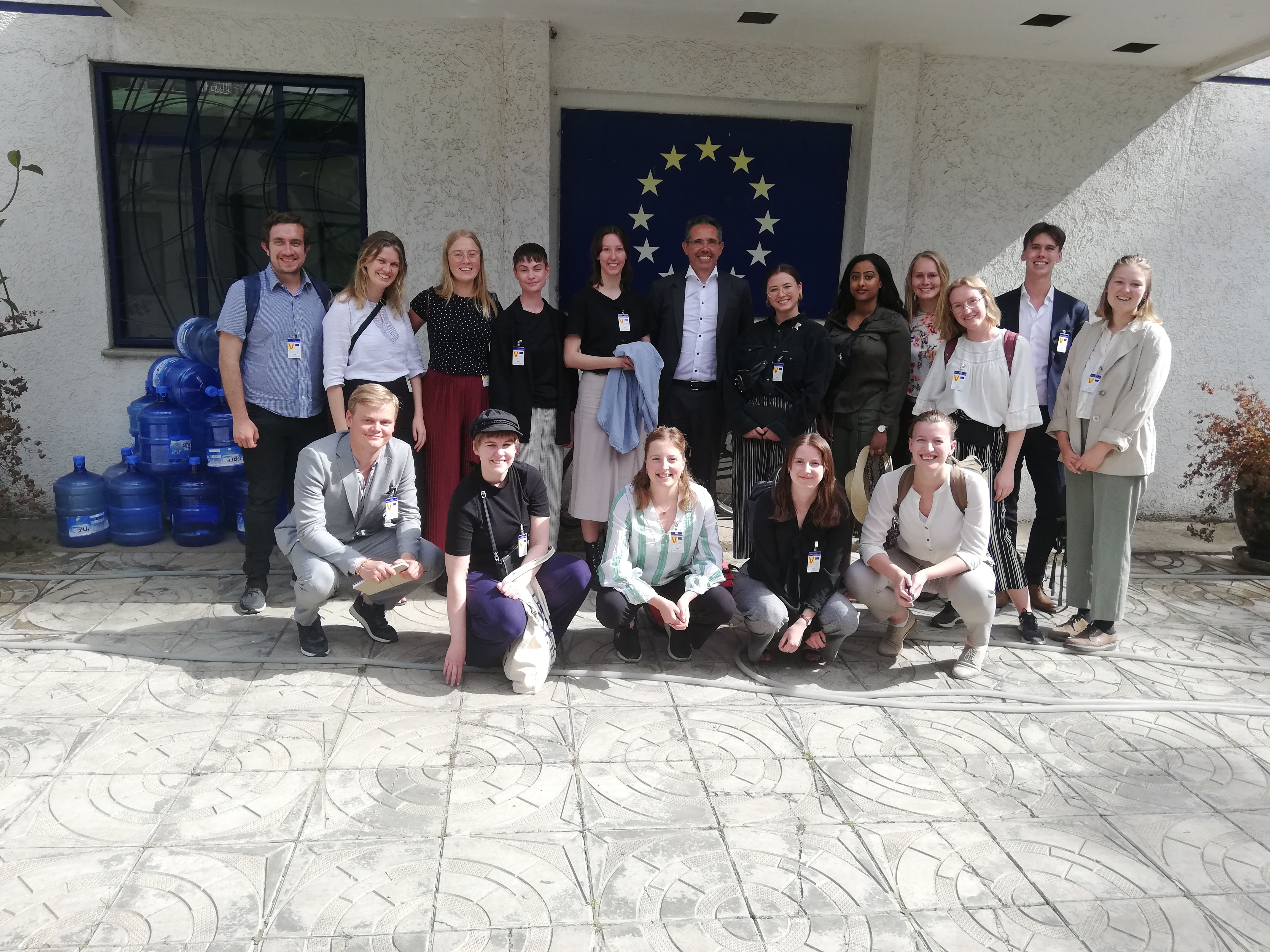 Second day of the trip, a day full of meetings! We had breakfast at our hotel and walk to the first one: the Swedish Embassy in Ethiopia. We were received with a traditional swedish fika by our hosts Helena and Alicia. During the meeting, they gave us a brief background of the work done at the Embassy; the different areas running and the projects each of them held. There are approximately 60 persons working in a very nice and modern building, between Swedes, from different governmental agencies, and local staff. 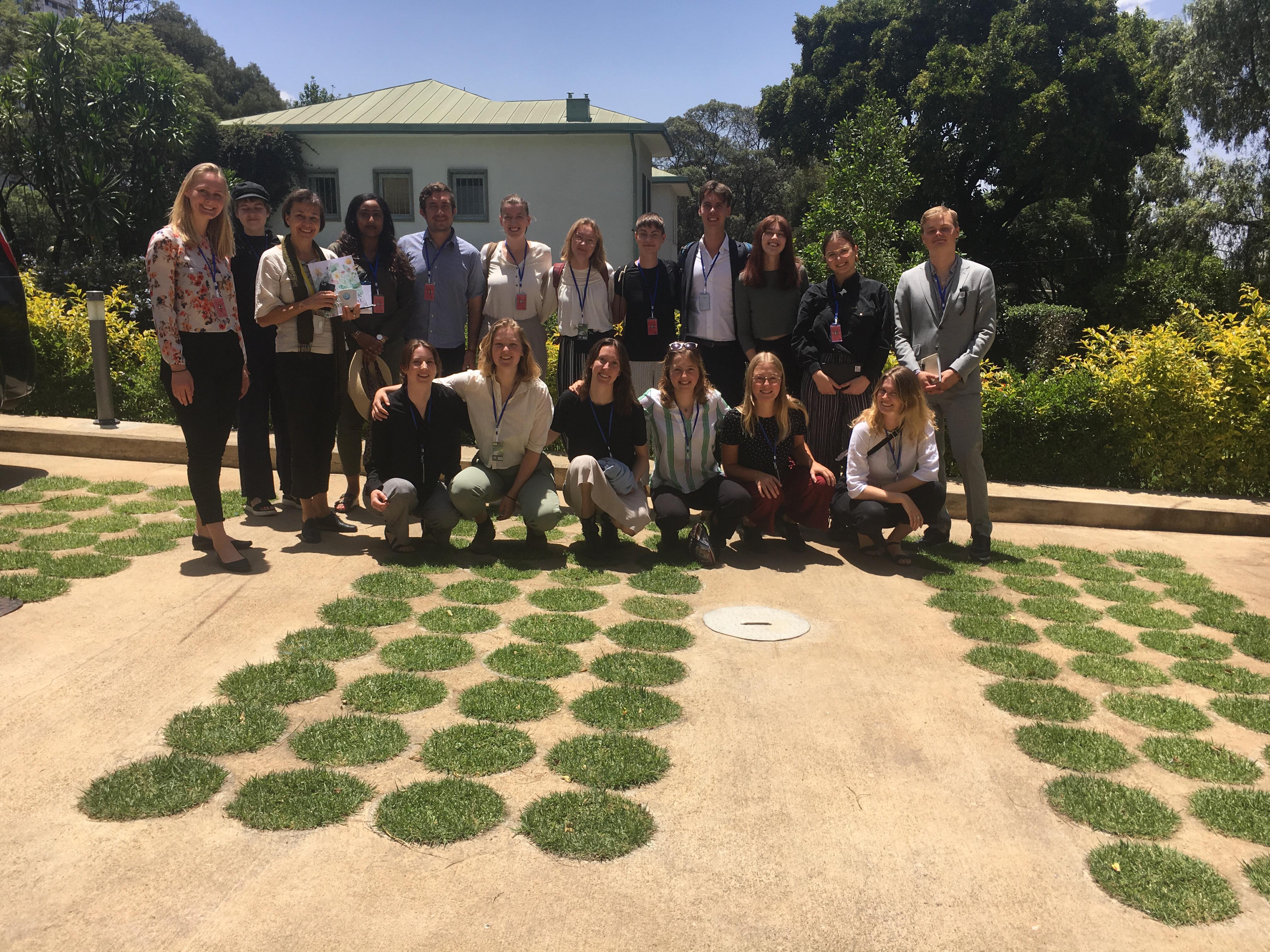 We had the opportunity to share impressions of the development of the political situation in Ethiopia since Abiy Ahmed is Prime Minister of the country. An important remark, that later was replicated in other meetings, was that the changes look good but that it is also important to realise that it is too soon to know what will happen in the future. However, the democratic and political situation is better and the ongoing changes have allowed the Embassy to increase the programs they have in the country. 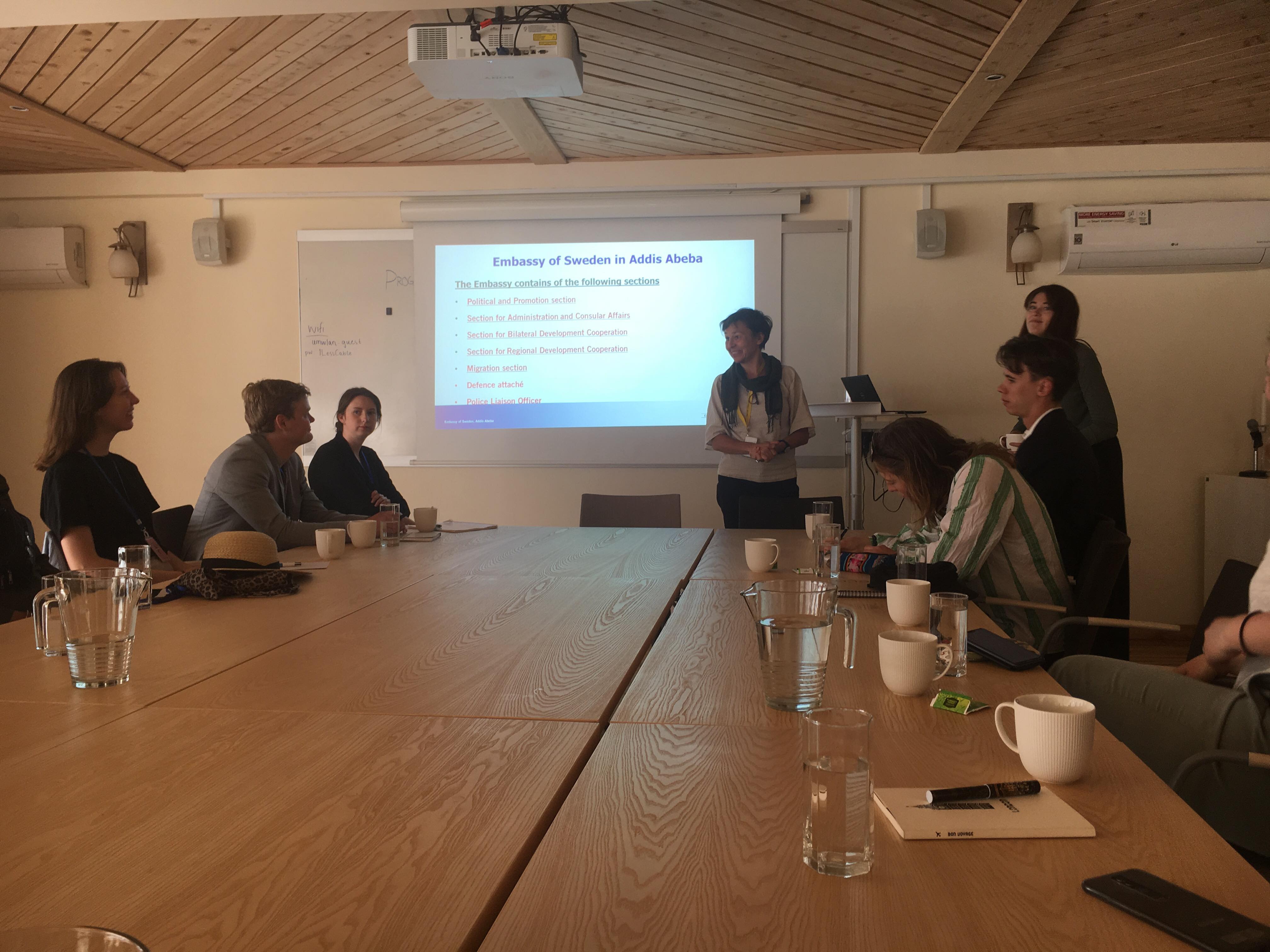 Learning a lot about the Embassy’s work in Ethiopia and Africa south of Sahara.

After the meeting we have a lovely lunch at the Embassy’s gardens. Some of the people of the group, alongside Alicia we went to search some really nice fasting Injera. We were ready for the next meeting! 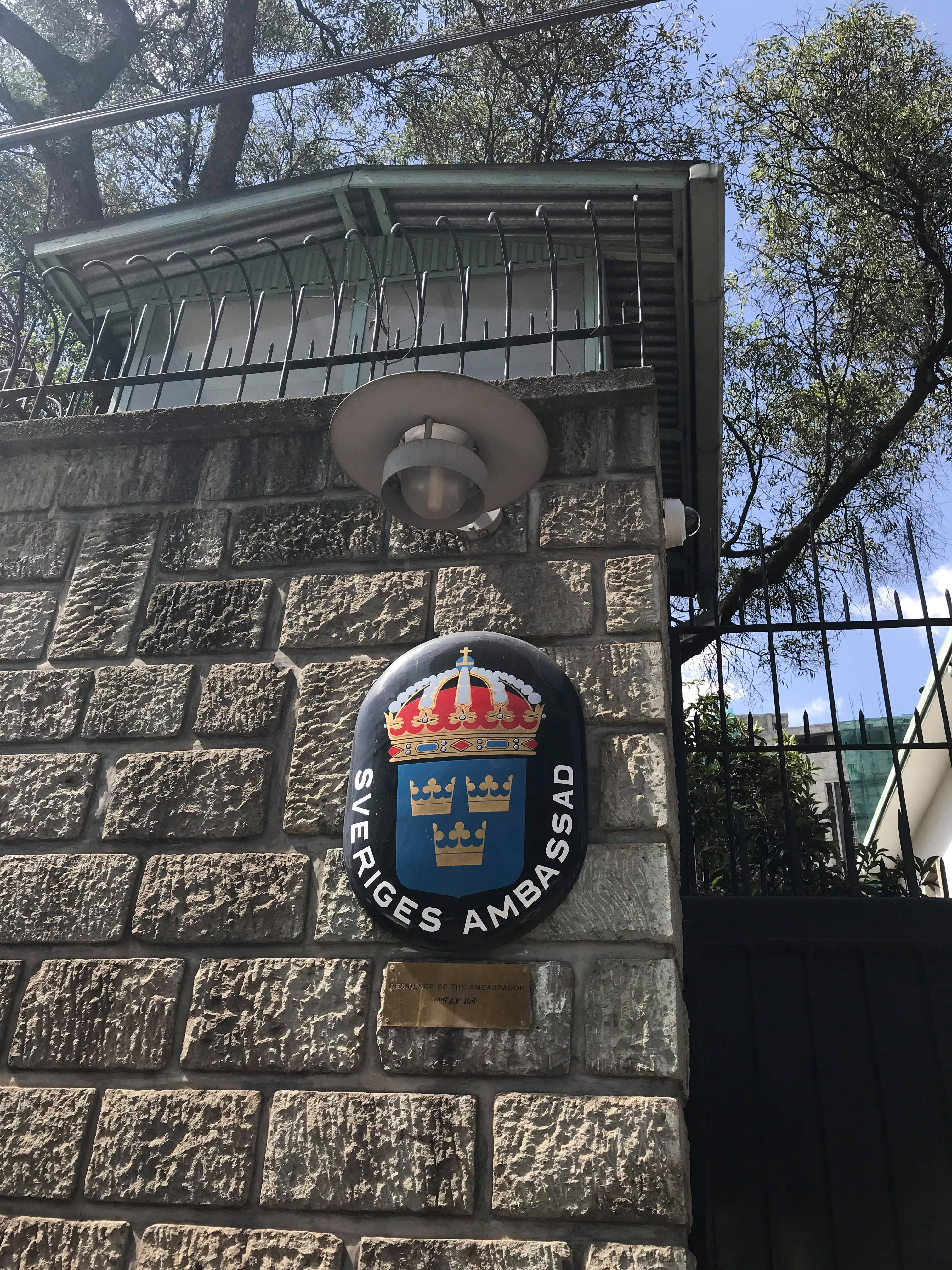 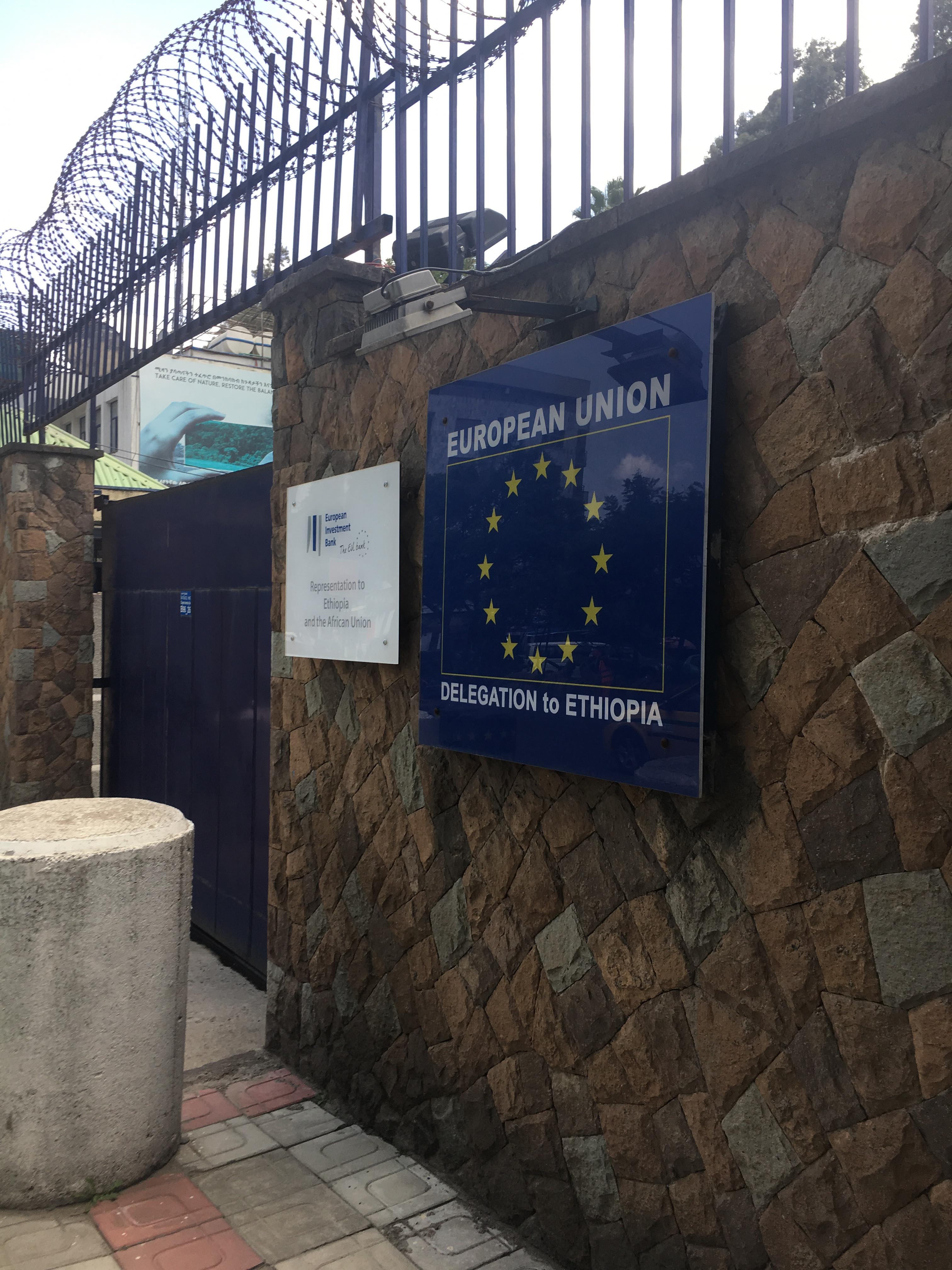 After the lunch at the Swedish embassy we head off in 5 different taxis, to the European Union’s delegation in Addis. We arrive and wait with excitement to meet Johan Borgstam, who showed up right before our eyes in a jeep with a waving EU flag. Johan Borgstam is an Uppsala University Alumni and has lived and worked for the EU in many different cities around the world. Other than a great entry, we had a very knowledgeable and intense meeting of questions, discussions and answers with Johan. We learnt more about how the EU works in Addis, about its member states and how it addresses issues in Ethiopia. Some of the things we spoke about included: ethnic conflicts, free speech, and the Eritrea and Ethiopia relations.

The discussion gave us a good starting point for the rest of the coming meetings on the trip as it deepened our understanding of the current situation in Ethiopia. We gathered a few facts that were both eye-opening and unawaited, such as that there are approximately 3 million people internally displaced in Ethiopia, meaning individuals that are refugees in their own homes. The reasons to this vary but are mainly a result of ethnic conflicts, and to other degrees a result of external investors in the agriculture sector resulting in land grabbing of locals lands.

The day finished with 16 exhausted people who were ready to go to bed. However, a few of us decided to push through that and have a small spontaneous night out at a lounge in Addis meanwhile the rest took it easy at the hotel. Overall the day was incredibly intensive and gave us a knowledgeable perspective on diplomatic work and what it entails.