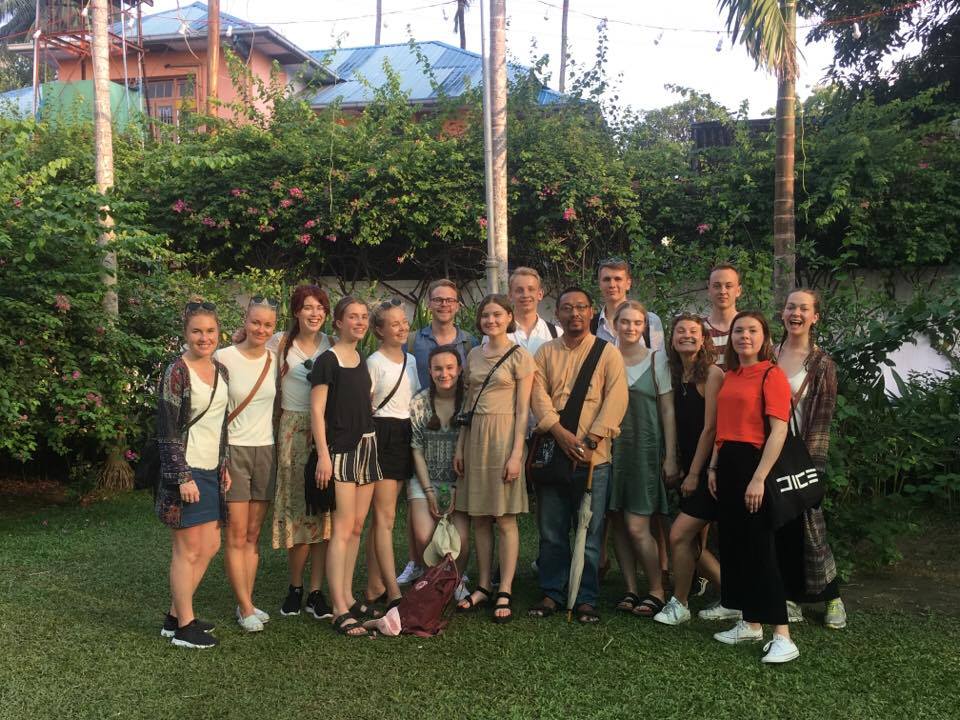 After a long but very comfortable (and fancy!) flight, the UF Travel Group finally arrived in Yangon, Myanmar! We took taxis from the airport, and a few things hit us straight away: the heat and humidity, the crazy and hectic traffic, and the way that the streets were packed full of activity. We received a warm welcome from those at the hostel and settled in straight away. We didn’t have any meetings on that day, and so spent the rest of the afternoon exploring the city.  In the evening we met with a friend of Linus, and went to a rooftop bar, where we had an amazing view of the Shwedagon Pagoda.

The next day, we woke up and had a nice breakfast at the hostel. Our first stop of the day was to take the circular train around the city, through the suburbs and outer areas of Yangon. It was a fantastic way to experience everyday life. Surrounded by locals, we were able to gain a glimpse of life in the more rural areas surrounding Yangon.  We saw many things – labourers working on the green fields, the bustling markets and people selling various items on the train. After three very interesting hours, we arrived back at the central station and jumped in a taxi to attend our first meeting.

We met with Letyar, the Programme Advisor of FOJO Media Institute. FOJO helps to train journalists, supports local communities with enhancing freedom of expression, and develops media activities. One such project that FOJO is currently working on is community radio, which will help local people build connections among each other. Letyar spoke with positivity about the developments that have occurred in Myanmar in the past seven years, including freedom of publishing and the possibility for journalists to study without as many restrictions. However, he also discussed the areas which are in need of improvement, including the Electronic Transition Law (limiting people’s ability to talk freely on social media) and the control of media houses through licensing. He went on to tell us about his own life, which has been an extremely colourful one. Letyar took part in the student demonstrations, which occurred during a time of economic crisis in Myanmar. In 1988, he went on to become involved in the ‘All Burma Student Democratic Front’, which resisted the military regime. For this, he was arrested, at the age of 19.
Letyar came out of prison in 1995, after four years in jail. He joined a political association once again – Letyar explained how his own politicisation was something that could not be reversed. In 1998, Letyar was arrested once more, and was given the death sentence because the regime accused him and his friends of threatening to topple the system. Letyar lived with the death sentence hanging over him for 12 years. We were shocked by the calm and casual way he spoke about this time. Letyar spoke about how he and his friends passed the time in prison – they studied both books as well as each other and one another’s lives. In 2012, Letyar was released from prison after the United States had been pushing Myanmar towards democratisation and human rights. With the visit of Obama to Myanmar in 2012, the regime let out political prisoners as a ‘gift’ to the then incumbent president. Letyar came out to what he felt was a ‘foreign’ country, and spoke about how it was difficult to readjust to everyday civilian life.
Letyar found his way to FOJO after being executive editor at a newspaper where his friend worked. He free lanced for Radio Friends International, and then got the job as Programme Advisor at FOJO. Reflecting on the events in recent years, Letyar emphasised how the development process is one which swings between progress and retrogression. On the one hand, he spoke with positivity about civil society organisations and transparency. On the other hand, he said that the peace process continues to be an extremely complex constitutional problem, and one which remains to be solved.

The meeting with Letyar was an amazing way to start off our study visits in Myanmar. It was particularly eye opening, and fascinating to hear a personal story from someone who remained so hopeful despite the struggle of his past. Letyar remains committed to his cause and strives to promote FOJO’s motto of ‘giving voice to the voiceless’.
We ended the day with dinner at a (rather strange) vegetarian restaurant. It served artificial meat and fish, including artificial pig’s brain and heart. As with everyone else who we have met so far in Myanmar, the people at the restaurant were so kind and welcoming to us. Arriving back at the hostel, we spent the rest of the evening hanging out on the rooftop, and watched the French elections results as they came in. It was great to end what had been an amazing day with a result that we had all hoped for!
By: Lucy Dodge and Sara Nuder